Among the most frequently visited pilgrimage centres of Poland, Kalwaria Zebrzydowska is part of one of Europe’s most interesting landscape and architectural projects. Over a million pilgrims visit this devotional complex every year.

The origins of the Sanctuary of Kalwaria Zebrzydowska go back to 1601, when Mikołaj Zebrzydowski, voivoda of Krakow, on Mount Żarek (in the Żar group) erected a chapel dedicated to the Crucifixion of Christ, following a model in chalk of the Chapel of the Holy Cross in Jerusalem. The chapel was consecrated as a church on the 4th of October 1601 by the Papal representative Klaudiusz Rangoni, and it was to serve as a place of prayer during Lent for the Zebrzydowski family.
Shortly thereafter, Mikołaj Zebrzydowski decided to build a chapel dedicated to the Tomb of Christ (following the model of the chapel with the same name in Jerusalem) along with a modest convent, based on a project of the Italian Jesuit architect Giovanni Maria Bernardoni, and of the Flemish architect and jeweller Paolo Baudarth. This church, dedicated to the Madonna of the Angels, was consecrated by the Bishop of Krakow, Piotr Tylicki, on the 4th of October 1609.
For the development of the Calvary, the decisive element was the reading of the writings of Christian Adrian Cruys, known as Adrichomius. These works, in which the writer describes the Holy Land at the time of Jesus Christ, inspired Mikołaj Zebrzydowski to found new Calvaries. Basing his ideas on the reading of Adrichomius, he built the stations dedicated to the Passion of Christ. Zebrzydowski, in fact, saw a notable similarity between his property, which stretched from Lanckorona to Żar, and the topography of Jerusalem.
So, the hill of Żarek was called Golgotha, another hill near Lanckorona was “the Mount of Olives”, another near today’s chapel “the home of Caifa” Mount Zion, the hill for the future construction of the Palace of Pilate was Mount Moriah and the river of Skawinka Cedron. The triangulations of the lands for the construction of the future chapels were completed by the priest Feliks Żebrowski, mathematician and astronomer and friend of Zebrzydowski.
The projects for the aediculas, on Zebrzydowski’s request, were prepared by Paolo Baudarth, who also supervised their construction. The chapels, that would be distinguished for the originality of their architectural features, were erected between 1605 and 1617, in the following sequence: Pilate’s Palace, the Sepulchre of Jesus Christ, the Mount of Olives, the Capture of Jesus Christ, the House of Anna, the House of Caifa, Herod’s Palace, the Sepulchre of the Mother of God, the House of the Mother of God, the Weight of the Cross, Ascension, the Last Supper, the Heart of Mary, the Second Fall (Western Gate), Saint Raphael, the Hermitage of the five Polish Brothers with the Chapel of Saint Mary Magdalene.
On the death of Mikołaj Zebrzydowski in 1620, the construction work of the Calvary continued with his son Jan Zebrzydowski, who from 1623 to 1641 had the five next passion chapels built (the Eastern Gate, the First Fall of Jesus Christ, Cyrenaic, Veronica) and the eight Marian chapels (1632), four dedicated to the Funeral and four others to the Triumph of Mary. Moreover, he developed the chapels already built by Mikołaj Zebrzydowski: of the Crucifixion (1623) and of the Sepulchre of the Mother of God (about 1623). Jan Zebrzydowski also built the so-called “steps” at the Palace of Pilate (1633) and the Chapel of the Finding of the Holy Cross, together with the Hermitage of Saint Helen (1623 – 1632).

The following founder was Michał Zebrzydowski, son of Jan. In this period, the convent was enlarged to the north (1654-1655) and a chapel was built near the south wall of the church (today the presbytery), especially for the miraculous picture of the Mother of God. This chapel is one of the most beautiful architectural monuments of Kalwaria Zebrzydwska.

Michał Zebrzydowski died in 1667 and the tutelage of Kalwaria passed to the family of the Czartoryski. Michal’s daughter, Anna Zebrzydowska, had married Jan Karol Czartoryski and with her, the property of the Zebrzydowski family passed to the Czartoryski. She died in 1668, and Czartoryski wed a second time with Magdalena Konopacka, to whom we owe the extension of a nave of the church (1702) and the construction of the two towers built in front of the church (1720). Today’s basilica is mostly the work of Magdalena Czartoryska, who died in 1694, and her son, Józef, who continued the successive works.

In the years from 1810 to 1812, on the initiative of Father Gaudente Thynel, the convent, in a rather clumsy manner, was enlarged by lowering the vaults and slightly lifting the first floor walls. This reconstruction was corrected later in the years 1897 to 1901, during the abbey ministry of Father Felicjan Fierek, with the project and the supervision of the Krakow architect
Karol Knaus.

From 1906 to 1910, Father Felicjan Fierek, prior of the convent, proposed to enlarge considerably the church (today’s basilica). However, authorisation for this work was denied by the curator of the Cultural Heritage of Krakow, in order to safeguard the monumental character of the religious complex and the convent of Kalwaria Zebrzydowska.

INFORMATION FOR PILGRIMS AND TOURIST GROUPS

• Pilgrims and tourists coming to Calvary in organized groups (15 people) can get a guide who will present the history of the sanctuary. The shortest version of the tour is about 45 minutes. This is possible from 9 a.m. - 5  p.m. (on the hour)

• A guide in English, Italian, German, and French should be booked 4 days in advance, in Polish - the day before the arrival at the Sanctuary, in Calvary Information Center (KCI) on telephone number:

• Holly Masses can be ordered in the sacristy, at the monastery gate, or through the mail

The Pilgrim House, restaurant, souvenir kiosk are open all year round:
• The pilgrimages coming to the shrine in groups and individually can make use of accommodation and meals
• A model of Calvary can be seen at the reception in the Pilgrim House

7 a.m. Mass in the Church of  the third Fall of our Lord Jesus Christ .


ORDER OF THE DAY THE SANCTUARY:

• At 6 a.m.: unveiling of the miraculous shrine of our Lady of Kalwaria
• After it there is a Holy Mass celebrated
• At 7, 8, 9, 12, 17, 19 hours there are celebrated Holly Masses in the Chapel of Our Lady
• At 9 a.m. The Holy Mass is celebrated in the intention of the Holy Father
• The Rosary in honour of Our Lady is said in winter time at 4.30 p.m. an in summer time at 8.30 p.m. After 8.30 Rosary there is so called Marian acclamation is followed by the vailing of the Shine of Our Lady 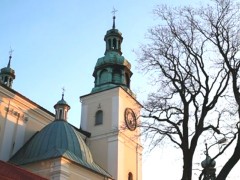 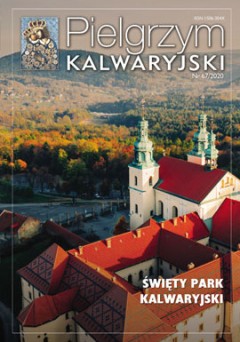